Average lifespan in the wild: 3 to 5 years

Did you know? Sockeye salmon meat gets its color from the orange krill they eat while in the ocean.The name sockeye comes from a poor attempt to translate the word suk-kegh from British Columbia’s native Coast Salish language. Suk-kegh means red fish.

Sockeye Salmon can also called “red” salmon because of the very red meat. They also turn red while going up the rivers to spawn., They range in size from 24 to 33 inches (60 to 84 centimeters) in length and weigh between 5 and 15 pounds (2.3 to 7 kilograms). Their rich taste is considered by many to be tops among salmon.

Sockeye Salmon are born in fresh water streams and rivers but unlike other species of salmon, spend their first few years growing in lakes. Once in a while lake water turns over from top to bottom. This can produce very acidic water and can make a poor survival rate. After growing in lakes, Sockeye journey out to sea and, growing rapidly, feed mainly on zooplankton. They usually stay in the ocean from one to four years.

During most years Sockeye Salmon are the third in number and provide a great fishery for both commercial and sports fishing.

Sockeye are anadromous, and can adapt to live entirely in fresh water. Freshwater sockeye were once considered to be a unique species, but were later proven to be identical to their sea-run counterparts. Sockeye can be found in drainages of the Pacific Ocean and have been stocked into several other waters. Although they can be caught, they aren’t usually aggressive at taking baits. So, they are more prized for food than for fishing.

The name sockeye comes from a mispronunciation of a coastal indian word suk-kegh, meaning medium salmon. As with other Pacific salmon, sockeye return from the sea to spawn in freshwater, but only enter rivers with lakes at their headwaters. Sockeye have held an important cultural significance in Native American culture. They remain a significant food source, but due to man caused changes to the environment, there has been an overall decline in population, with the loss of some specific runs. The population in the Pacific Northwest outside Alaska especially has suffered.

Sockeye meat is red and high in oil. It is also the most valuable Pacific salmon. It’s considered a great meat fresh, smoked, canned, salted or frozen.

Sockeye are the slimmest and most streamlined of the Pacific salmon. They have a back and head that are metallic green blue silvery on the sides and white or silver on the belly. There can be some speckling, but there are no large spots. Young sockeye have small dark oval parr makrs on their sides.

Sockeye are usually between 4 and 8 pounds. The sport record is 15 pounds, 3 ounces. Freshwater sockeye are much smaller, not usually reaching over a pound due to low food sources.

The sockeye is native to the northern Pacific Ocean. It is found from Hokkaido, Japan to the Anadyr River in Russia; from the Sacramento River in California, to Point Hope Alaska. Freshwater sockeye exist in Japan, Russia, Alaska and a few western Canadian provinces, and 10 U.S. states.

Sockeye are anadromous, and live both in fresh and salt water. They mainly go back to rivers with a lake at its headwaters. They may live in lakes for up to 4 years before returning to the ocean.

Sockeye usually spend between one and four years in the ocean before returning to spawn in their home stream. Fish that return after only one year are usually male and are called jacks. They return during the summer or fall. Their runs don’t vary much on timing. Freshwater sockeye spawn August through February, and sea-run sockeye between July and December.

Eggs hatch in the winter, and the alevins live off their yolk sac until early spring. Then they enter the fry stage and come out of the gravel. In lake systems, the young stay between one and three years in the system before heading out to sea as smolts. If there are no lakes, most young head for the ocean once they come out of the gravel. 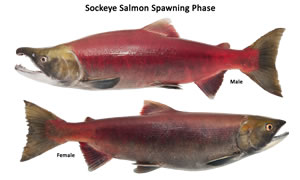 When they have entered their home stream, sockeye use their sense of smell to lead them back to their spawning grounds. They spawn at the headwaters just below the lake or in the lake itself. The female digs a nest (redd) with her tail and lays her eggs. One or several males swim beside her and fertilize them as she deposits them. The female then covers the eggs with gravel, while the males protect the nest. A female can produce between 2,000 and 4,500 eggs. They die soon after spawning.

Spawning sockeye have a humped back and hooked jaws with sharp teeth. All sockeye turn red, either light or dark, on the back and sides; have an olive or pale green head, and a white lower jaw. This completely red body makes it different than chum salmon, and the lack of spots sets it apart from the rest of the Pacific salmon. Another feature that distinguishes the sockeye from the chum is the shape of gill rakers on the first gill. Sockeye have 28 to 40, and chum have 19-26.