Did you know? Pink salmon are also called Humpies because of the large hump in front of the dorsal fin which appear on males as they are nearing the spawning grounds.

The scientific name for a Pink Salmon is Oncorhynchus gorbuscha.

Most sport fisherman consider them the least desirable of the salmon species because of their mild flavor, small size and limited ablitly to give a good fight when on the end of the line. Pink salmon have a strong smell on them as they come out of the water and can be recognized easily by their large oval spots on the back and tail. Pink salmon have a very high content of Vitamin B12 and Niacin.

Pink salmon hold a great significance commercially in Alaskan fishing communities. It is the smallest of the Pacific salmon. It is somewhat valued as a sport fish, but not quite as much as coho or chinook. It’s meat is pink and is usually canned, but can also be eaten fresh, smoked or frozen.  The meat is best when the fish are in open water, since it starts to deteriorate once the fish go to the rivers.

Pink salmon are also known as humpback or humpy because of its humped back that develops in males before spawning. It also develops a kype (hooked upper jaw).

While at sea, pink salmon are silvery with a bright metallic blue upper half. It has several black oval spots on its upper half as well. Upon spawning, males have pink sides with brown or olive colored blotches. Females become olive on their upper side and have a pale underside. Young pinks have deeply embedded scales and lack parr marks that are typical to other salmon species.

Pink salmon average between 3 and 6 pounds, and are 20-25 inches long. They can reach up to 15 pounds and 30 inches. The sport record is a 13 pound, 1 ounce fish from the Great Lakes in Canada.

Pink are indigenous to the Pacific and Arctic Oceans, Bering Sea, Sea of Japan and Okhotsk Sea. To the south, they are found to the Sacramento River in California and down to Kyushu in the Sea of Japan. In the north, they are distributed from the Arctic Ocean to the Mackenzie River in Canada. To the west, it ranges to the Lena River in Siberia, as well as eastern Korea. Pink salmon are most abundant in British Columbia and Alaska. Alaska depends on the pink salmon for sustaining the commercial fishing industry.

Pink salmon spend 18 months at sea and then typically return to their natal stream or river, although they’ve been known to go to non-natal rivers as well. They travel between 40 and 70 miles inland.

Most pink salmon mature in 2 years, so odd and even years are basically unrelated. Odd or even year cycles are dominant in some areas, but are about even in others. Cycles also can take turns at dominance. 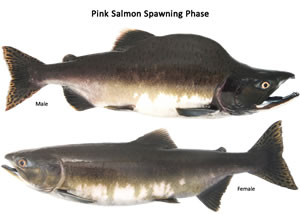 Pink salmon have the nickname autumn or fall salmon since they have late spawning runs; typically between July and mid-October in Alaska. Females dig nests (redds) and lay hundreds to thousands of eggs. The eggs hatch between December and February. Juveniles become ready for swimming to the ocean soon after they hatch and return with chum and sockeye. They are known to hybridize with chum easily. Adults die shortly after spawning.

Young pink do not typically eat, but eat insects when they do. Ocean-dwelling pink eat plankton, crustaceans, small fish and squid. They do not eat on their return to their natal streams for spawning.