Since Izaak Walton penned his thoughts in the 1600’s on the art of flyfishing. In his day, reels were unknown and the fishing line was attached to the end of the rod. Monofilament would not be invented until the dawn of the plastics era, hundreds of years in the future. Line was typically made of horsehair, silk, or a combination of the two. Rods were fashioned out of wood or bamboo cane.

Technology allows us to pursue salmon in ways our ancestors would never have imagined. We use terms like Spider Wire, chemically sharpened hooks, Ultra-violet attractors, and Global Positioning System. In the last 30 years, product advancement has taken giant leaps, allowing us to pursue fish with incredible accuracy and results.

One of the biggest advancements in sportfishing was the invention of monofilament line. Monofilament is a single strand fishing line as opposed to braided lines made from multiple fibers. It comes in a variety of colors including white, green, blue, clear, and fluorescent. Monofilament is manufactured by mixing polymers and pushing it through a tiny hole, which is then wound onto spools for sale. Usually, the thicker the diameter, the stronger the line. One of the drawbacks of monofilament line is the deterioration process that occurs with age and/or exposure to sunlight. The offsetting factor is that it is relatively inexpensive, so the fisherman can afford to change it when needed.

Until the advent of the sport fishing downrigger in the late 1970’s, one of the biggest problems for sportsfishermen was getting their lines deep enough. Lead weights were generally the first choice, but could prove cumbersome when fighting a fish. The sporting aspect was greatly reduced when the fish had to pull 2 pounds of lead every time it tried to take a run.

The next improvements came by way of the planer. Deep Six and Pink Lady made popular models and were quite common up until the late 1980’s and early 90’s. The planer used water drag and a small amount of weight to pull the lure deeper. When the fish would bite, the planer tripped, and caused a much smaller amount of drag when fighting the fish.

The downriggers you see on sportfishing boats today are modeled after the commercial trawling systems perfected in the 1930’s. Commercial trawlers attached 20 to 50 pounds of lead to braided stainless steel wire and raised an lowered the weight to different depths depending on where they were fishing. They would clip some type of lure and a length of leader onto the wire ever 6-12 feet. A salmon would bite, get hooked, and thrash around until the fisherman started the gurdy coming up to check his lines. He would unclip every leader from the mainline as the it was was being wound up from the depths. If there was fish on the line, he would flip or gaff the fish onto the boat.

One of the drawbacks of this system was that everytime a large or aggressive fish would become hooked, it would invariably break the leader or pull the hooks out. When inventors began experimenting with smaller versions of this fishing system, they devloped a method for attaching the line from the fishing rod to the downrigger weight by means of a release clip. That way when the fish would bite, the clip would release and the fisherman had his fish with no weight on his line. This allowed a fisherman to fish virtually any depth and not have to contend with wieght on the line when fighting a fish. 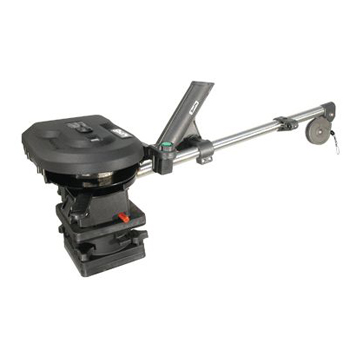 With the proliferation of electric downriggers after the mid nineties, virtually no serious salmon fisherman leaves port without them. The Scotty, Penn, and Canon are the 3 most popular electric models. Canon and Penn have more advance models where you can set your depths to go up or down automatically while you are doing something else, such as steering the boat.