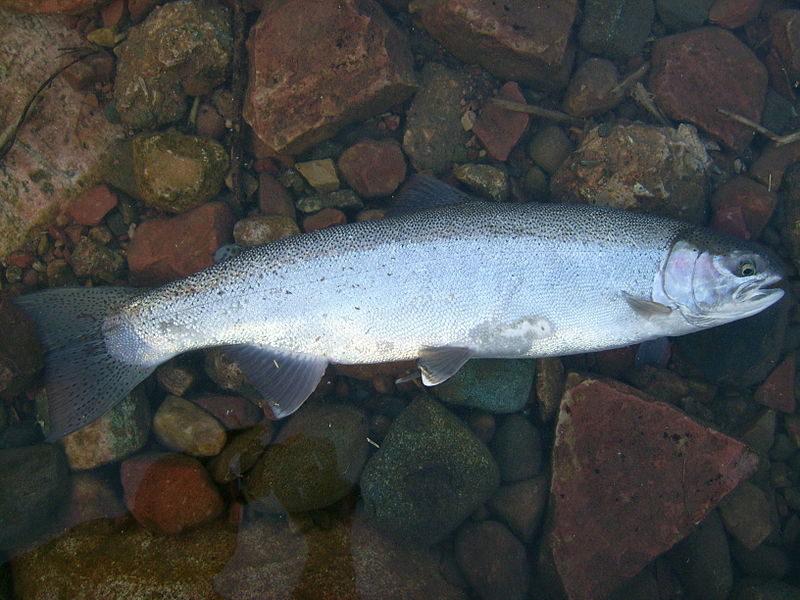 Steelheads are indigenous to the Pacific coasts of North America and Asia, and have been successfully introduced to inland lakes, especially the Great Lakes. In freshwater they live in lakes and migrate to tributaries when spawning. They have spawned the most successfully of any introduced trout or salmon. Steelheads in either environment share similar patterns of behavior.

Steelheads are considered a great challenge for fishermen, both in lakes and streams. It is athletic and can reach fairly large sizes and is a strong fighter. Commercial fishing also go after steelhead. Its meat is orange or red and is sold both fresh and frozen.

Steelheads are usually thinner than rainbow trout. They have a blue green shading on their back with dark green or black spots (which also cover the tail). The sides become a silver white and the stomach is white. Steelheads that come in from sea are much shinier. Most of their color is under the silvery outer sheen. The longer they stay in freshwater getting ready to spawn, the more they begin to look like other native rainbow trout.

Young steelheads are identical to rainbow before going to the ocean. They have 8 to 13 parr marks on their sides. Before making their way to the ocean, steelhead smolts look like small adults.

Steelheads are much larger than their rainbow counterparts and can get to be over 40 pounds. The sport record is a 42 pounder caught in Alaska. They usually weigh between 5 and 12 pounds. They can live for up to 8 years and return to rivers when they are five or six.

Originally, steelheads were found in North America from the Kenai Peninsula in Alaska to Mexico’s Baja Peninsula and in coastal rivers. There are significant populations in Northern California, Oregon, Washington, southern Alaska and British Columbia. Man caused environmental changes have been hard on the populations. Steelheads are also indigenous to the Asian Pacific and have been transplanted to the Great Lakes of North America. Here, their population is maintained by hatcheries. They have also been transplanted to other bodies of water in North America, as well as other continents.

Steelheads have a much more difficult life than rainbow trout, due to their migration to the ocean. In Alaska, only five or ten steelheads return for every 100 that go to the ocean.

Most steelheads come back to the rivers in the fall and enter freshwater systems from August to winter. There are some spring-run populations that come to the rivers April through June. They mix in to the population of rainbow trout in stream. Other populations yet return in July and are called summer steelhead.

Steelheads spawn in the winter and spring. Males can spawn with various females, and males die more often after spawning. Steelhead differ from salmon in that it can spawn more than once, and fish that are bigger than 28 inches long most always have more than one run. After the spawn, they return to the ocean to replenish the strength lost from the journey. Some fish will return to spawn a few months later, but most that return will do so after another winter at sea.

Steelheads typically stay in their natal freshwater stream or river for three years before heading to sea. Because they don’t leave the stream at the same age, return after the same time, or die after spawning, steelhead populations vary greatly in age. Various runs can appear at the same time.

In the Great Lakes and other inland systems, steelheads have a similar life. They move to tributaries from late fall through early spring and spawn in late winter or early spring. Summer-run steelheads appear at the mouth of the tributaries in summer months.

When in the sea, steelheads eat squid, crustaceans and small fish. In lakes they eat baitfish. They refrain from eating during the spawn.