Freshwater salmon were introduced into the Great Lake system as early as the late 1800’s. The main types are Chinook, Coho, Pinks, Kokanee (Sockeye), and two strains of Atlantic salmon. 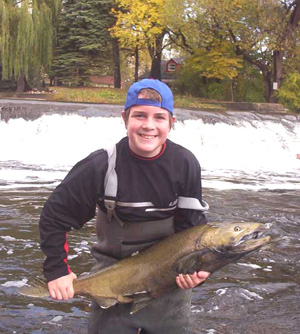 Chinook: Chinook were introduced in the 1870’s, but they eventually disappeared. In 1966 there was a collective effort from Michigan, New York, Wisconsin and Ontario to reintroduce them. Chinook males generally live for 1-2 years and females from 3-4 years. The mature females are obviously larger. Unlike Chinook in the Pacific Ocean, land locked Chinook stay in water less than 100 feet generally. Pacific Chinook can often be found from 100-200 feet of water, unless they are following the route they took as a smolt. Chinook in the Great Lakes take longer to mature than ocean run Chinook, mostly because of feed sources.

In most rivers Chinook (Kings) start making their way up during late August and early September. By early October most Chinook have turned very dark and the run is almost at its end. This is similar to the spawning habits of Chinook on many parts of the west coast of North America.

Coho have been in the Great Lake system for around 50 years. They generally spawn in October, as they would in the Pacific Coast. Coho salmon can generally be caught casting from shore until it warms up in June. After that, they head towards the cooler deeper water. Coho can be caught trolling while fishing Chinook and trout since all three feed on the same bait fish.

Coho follow about the same timeline as Chinook (Kings) in most rivers coming from the great lakes. Coho are outnumbered by Chinook in most rivers.

Pinks were introduced during the 1950’s. Pinks usually spawn every two years, however, some pinks take longer to grow in the lake system and therefore take up to three years to mature, so some pinks will be in the river system every year.