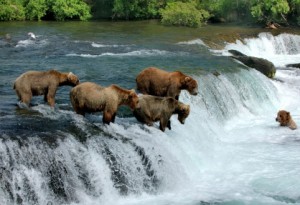 Alaska has long been known for great halibut fishing. But Alaska also has some great ocean fishing for Coho (Silvers) and Pinks (every second year). Chinook (King) salmon are mostly caught in the rivers, however it is possible to hook into one while on the ocean.  It is generally known that you catch Coho and Halibut in the Ocean and King salmon in the rivers. For those people that don’t like the ocean waves, this is a great thing.

has long been famous for its return of large Chinook. Every year eager fisherman fight their way through the crowds to get their crack at a large Chinook. The Kenai is one of the best known rivers in Alaska because of the large Chinook that frequent the river and this also means you will find many fisherman around you fishing in anticipation of the big one.

For those people that would like a little peace and quiet, there are many rivers in Alaska and lots of terrain that provides opportunity for those who want to get away. For some, the thrill of seeing Grizzly bears close by on the feeding grounds is almost as good as the fishing experience.