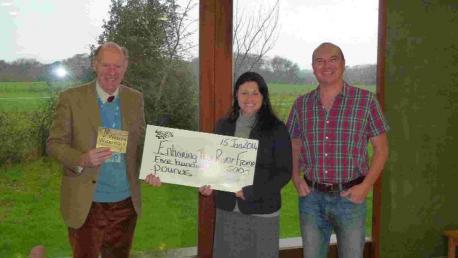 A PROJECT to enhance the River Frome has been recognised for its work.

The Enhancing the River Frome, the Final Furlong scheme overseen by the Frome, Piddle and West Dorset Fisheries Association (FP&WDFA) has won a £500 Wessex Watermark Award.

The award will help with the ongoing management work being carried out along the River Frome that has helped return the dwindling stocks of migratory salmonids to the spawning beds above Dorchester.

Wessex Water’s catchment co-ordinator Zoe Pittaway handed over the award to the association when she paid a visit to the Freshwater Biological Association River Laboratory at East Stoke near Wareham.

The FP&WDFA’s ambitious project began back in 2006 with the aim of giving the migratory salmonids – which include salmon and trout – access to the pristine spawning gravels of the upper Frome.

It was achieved by removing manmade barriers in the river, improving river band erosion caused by cattle poaching and installing the Louds Mill fish pass at Dorchester.

The association worked closely with the Westcountry Rivers Trust and the Game and Wildlife Conservation Trust’s East Stoke Fisheries Research Station. FP&WDFA chairman Charles Dutton said: “We have adopted a policy of letting mother-nature repair herself.

“So far we have seen an improvement by removing two major in-river barriers.

“We have two more major obstacles to remove and when that has been achieved it will open up 54.6km of pristine virgin spawning waters in the Frome’s upper catchment.

“Survival of the young fish over their first winter to the smolt stage is nearly twice as good in the upper Frome than in the lower Frome, meaning that more young salmon and sea-trout will make it out to sea.

“This grant will enable us to complete the barrier removal work we have been planning.”

The Watermark Award provides funds for environmental projects within the Wessex Water area and has supported over 900 initiatives in the last two decades.

The awards are organised by The Conservation Foundation and all projects are judged by a panel chaired by its president David Bellamy.

To mark the 20th anniversary of the Watermark Award scheme Wessex Water has also launched a special award to specifically support water conservation projects in the region.

The Sustainable Watermark scheme will run until March and has £10,000 to support groups in the area with up to £2,000 available for single projects.

This article can be seen at: http://www.dorsetecho.co.uk/news/10945112.Award_recognition_for_River_Frome_enhancement_project/