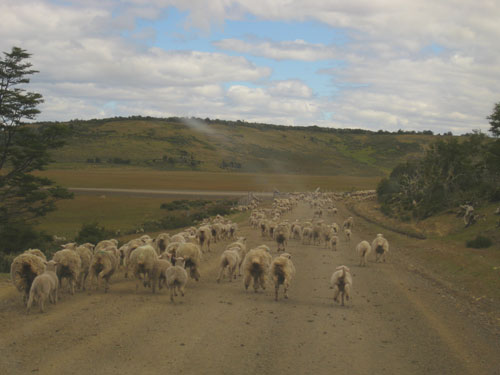 Tierra Del Fuego is definitely an interesting place. The culture is sheep farming and this is all you will see while traveling the large expanse of dusty gravel roads. Even though it can turn to rain at any time, the constant wind gusts keep the ground mostly dry and that is definitely the case with the roads. After about 5 hours traveling we came to a very large estancia. In South America a farm is called an estancia which literally means a place to stay or a ranch. Because the land is so dry and the soil barren, the only possible livelihood is sheep. There are cows in the central and northern areas, but mostly sheep in southern Chile. The estancias are much larger than ranches or farms in North America because of the low sustainability per acre. The estancia we stayed on was many hectares and is navigated by vehicles and by horseback. Gauchos are South American cowboys who tend the farms. They live by very primitive means often without power and modern comforts. We stayed in a place that had limited hot water, heated only by the woodstove in the kitchen.

Fishing opportunities are quite vast in this area. The key is knowing where to go. Just because there is water somewhere does not mean there are fish. And sometimes there trout in the most unlikely places. We fished one very small lake which most would call a pond. You could wade most of it and it was only about .5 of a mile long. To my 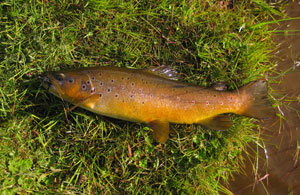 surprise, it was filled with mostly large trout. The first brown trout I caught was 4.5lbs. We roasted it on the fire for lunch. After lunch one of my fishing buddies headed out to the same spot I was at and started hooking one fish after another. By the time I got there he was finally landing one after losing a few. I immediately hooked into a large trout about 7-8 lbs that jumped and really gave a good fight. After releasing him, all 5 of us fished for another couple hours and hooked a few more trout. All the trout seen and hooked were quite large. This seemed to be a strange phenomenon considering the amount of water for them to live in.

During the trip we also fished Lago Blanco and Rio Blanco which are large bodies of water. I was a little disappointed with the results; however, there is apparently some good fishing on Lago Blanco in other locations, just not where we fished at the south end of the lake. During the trip we fished the Rio Grande in a few different parts. The goal was catching sea trout which are sea run brown trout. Among 5 of us, we caught 5 sea trout, none bigger than 8 lbs. We were there at the end of January, however the best time is either October or March. Next time I go, I will go in these months! All in all, it fueled my passion for fly fishing which previously was quite limited. I had mostly fished salmon in the river by the fly, but fly fishing trout can be quite and art. I plan on returning to Chile sometime, this time a little better prepared for what I can expect. For all nature lovers it can be quite a romantic place with a wide expanse of thinly vegetated land and a few different species of animals including the most common guanaco which roams freely in many places. 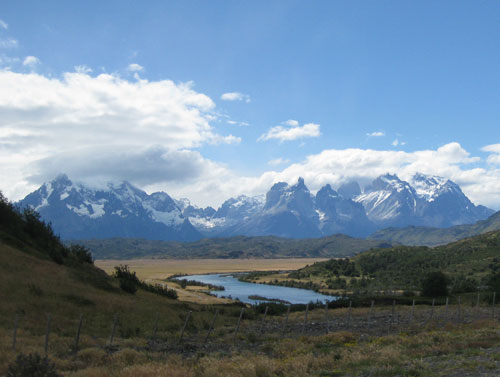 As some of you know, I took a Southen Hemiphere fishing trip in January. I was invited by my one of my guiding friends in Sweden who holds the record for the largest salmon caught around Stockholm. The idea was to try fishing some new areas that hadn’t had much traffic fishing. We started off in Punta Arenas which is at the southern end of Chile. Except for the city of about 100,000, the rest of the area is sparsely populated. I was a little surprised when I arrived how poor the area was. I found out that people in South America make about one third to one half what people in Canada and the US do.

The first part of the trip we went fishing for Chinook in the rivers. It is not really my favorite thing to do, but as Chinook are recent settlers down it this part of the world, I thought I would give it a try. There were lots of fish, but also lots of fisherman. There was a catch and release rule in effect, but this doesn’t mean much to the locals when there is no enforcement. So we were the only ones doing catch and release! There seemed to be some pretty good numbers of Chinook in this area. We fished the Serrano River which was about a 5 hour drive on both paved and gravel roads. You will have to get used to traveling on gravel roads if coming to Chile. It doesn’t mean less traffic, just potholes and bumps! 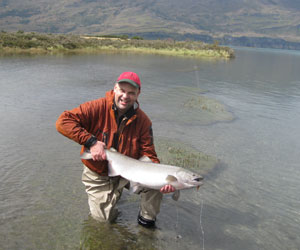 The first afternoon we got there, there were only a few people there and I caught 3 Chinook on spoons after getting tired of seeing fish being caught on spoons and not getting anything on the fly. One of the guys managed to get one on a fly, but there wasn’t too much happening. The next couple days were very slow and we ended up leaving in hopes of getting some brown trout in the Tierra Del Fuego area. This is a really a big island that Chile and Argentina share. I am not entirely sure of the history, but apparently there was some agreement that Chile couldn’t have land on the east side of the peninsula.